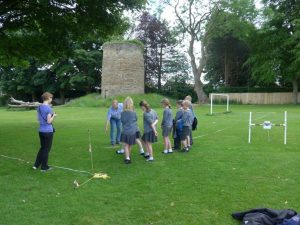 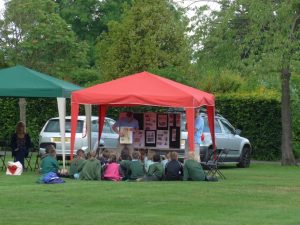 Following the successful allocation of a Heritage Lottery Grant for the improvement of Chase Park in Whickham, the first of many engagement events identified in the community engagement plan took place on Friday 24th June.

The Chase Park Archaeology Event gave 140 Year 5 pupils from the local Primary Schools in Whickham an opportunity to learn about what the park was like back in the 1700’s. Three key activities were identified for the young people .

Activity 1 – Working with archaeologists from Durham University who were commissioned to deliver a survey of the park for the scheme, the pupils were given an introduction into geophysics, how it works and the equipment they use, as well as participating in a practical geophysics activity. The findings of the survey will also be shared with the children in a class room environment.

Activity 2 – Volunteers from Whickham History Society discussed the role the that the mill played in village life with the children. The volunteers explained what it would be like to live in and around Whickham during the 1700’s and the types of jobs people would do.

Activity 3 – The final theme of the event was delivered by the Urban Bakery who gave an excellent demonstration of the milling of the grain and how the bread was made during this period. Samples of authentic bread were available for the children to try.

Coming up in September -The second part of the archaeology project will involve a smaller cohort of secondary school students working with the archaeologists from Durham University. Planned to be delivered in late September the event will focus on recording the exterior architectural features and the internal assessments of the windmill. It is anticipated that students with a keen interest in engineering, history and art being engaged, with the latter being asked to help record the stone work through sketching.